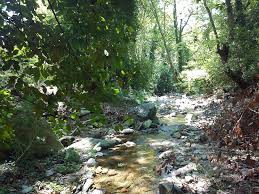 Annoying Dream:
For some reason, I've lately been having dreams in which I somehow end up in a wooded park and find myself getting lost and running into dead ends as I try to navigate its trails and roads. This park is a real place from my boyhood, a fairly large and heavily wooded park in the town in which I was born and lived until I was thirteen. It had (and I presume still has) hidden trails, a couple of weird bodies of water, an old stadium, a police shooting range, some assorted attractions like a public swimming pool and a dirt-and-gravel road that cuts through its back regions, but which doesn't really go anywhere--it just loops back around to where you started. But in some iterations of this dream, I am either walking or driving that road and somehow just can't quite find my way back out of the park. The road forks in strange ways, generates long sidepaths that dead-end in the woods or run into a large lake (there was in real life swampy flooded lake-like algae-choked area of water there that one could get to by following a dead-end path from the main road--and where it was believed that teenagers would go to fuck in their cars--but nothing nearly so large as the dream lake). In last night's version of the dream, instead of following the endless ever-changing road, I got similarly disoriented on a trail that cut through the woods and followed a narrow shallow stream. This trail and that stream were real things back in those days, too. During the summer when I was twelve, I frequently ventured down this trail by myself and masturbated. I enjoyed doing this outside so much that it became a nearly daily habit that summer even on rainy days, always standing in the same hidden spot and squirting on a clump of milkweed. It's amazing that I was never caught doing this because, while the path itself and my favorite spot on it were quite hidden from view, it was still traveled pretty frequently by other kids who liked to use it to cut aross the deep foresty middle of the park and feel some kind of sense of adventure from doing so. But I always got away with it. In fact, the only thing I was ever seen doing with my fly open was pissing in the stream that ran next to the trail, but that was totally non-controversial as it was absolutely standard for every boy who ever went to that part of the park to piss in that stream as if it were a long public trough-style urinal. In this dream from last night, I was on that same path, and I remember so many vivid details of it that makes me feel like my old impressions of it had risen whole and unchanged from some deep geological layer of memory. In the dream, I didnt jerk off and wasn't in the least bit horny enough to want to do so anyway, because I was intensely frustrated at how long circuitous the trail had become, and how it seemed that no matter which direction I went, I was just getting farther and farther away from the park's exit. At one point, I decided it would somehow be faster to simply go back the way I came and quit trying to find the end of the trail, but then the way back had changed, as if the path had been reworking itself behind me as I trod the woods' depths. Eventually, I made myself wake up. I can't always do this, but occasionally I have the ability to realize while in dream-space that I am probably dreaming and can just put an end to whatever dumb situation is going on by waking myself up.

New book project:
I am well into the editing and revision phase of a long project that I will probably release through (the long dormant) M-Brane Press hopefully later this year as both a series of ebooks and a single big print volume. It's a gay pornographic science fiction thing with elements of planetary romance and cosmic horror, set in a fantasy version of the Solar System several centuries from now, centered around a cast of specially-endowed characters that work almost like a Doc Savage-type secret organization to save the world again and again from various insidious threats (while continually getting their rocks off). I started it last summer, and added over fifty thousand words to it as my NaNoWriMo project last November, and it's been kind of growing gradually since then. I may release it pseudonymously, not because of its content but more because its built on the conceit that it's an assembly of several dudes' diary entries put together by an editor many years after the events described. So I think I will credit the book to its imaginary editor. It's become a lot more complicated, elaborate, nuanced, weird and just plain longer than what I had intended at the outset (which was just to knock out some quickie Kindle porn really fast and see if anyone would actually buy it), so I am months behind my own deadlines on it. The original idea was to release it as a bunch of ebooks, each "book" really just being a chapter in a serial. Typically these erotic Kindle books on Amazon tend to really just be four or five thousand-word short stories, and sometimes even shorter than that. My project is currently mapped out to have twenty-seven of these "books", each with a number and a lurid subtitle (I was kind of inspired to that number by Mark Danielwski's The Familiar, which he intends to tell in twenty-seven massive volumes). These individual book segments tend to be clocking in at around ten to twelve thousand words (and they get longer as I lard them up with "scholarly" footnotes) so a bit longer than is typical for the Kinde erotica format, but that's for the best, I think. I find a lot of that stuff to be too brief and not sufficiently fleshed out (and just plain awful) anyway. The final number of chapters may change by the time I am done, because a few of the unfinished ones seem to not need to exist anymore, while a couple of new ones that weren't even in the original outline have grown up and become important to the story arc. Also, I a few months ago, I had more or less decided to kill off one of the characters and excise him from the whole storyline because he didn't seem to be doing much of anything important, and I thought I maybe had too many major characters anyway (nine of them). But more recently, I kind of fell in love with the lad when he suddenly needed to be at the center of a couple new plot threads due to his special ability (he paints and draws stuff derived from prophetic visions). So he stays.
Tags: dream journal, gay, m-brane, masturbation, personal writing, porn, publishing, sex, wip, writing
Subscribe